20 December 2019 - Published by Torben Quickert
How does it feel to be part of an automated traffic? At the event "Shared Mobility Rocks" in Brussels, the ART Forum partners Taxistop, Autodelen.net and City of Bremen let the participants act as automated traffic means of transport.

Imagine a busy intersection at the heart of a big city. Lot’s off pedestrians, cyclists, car drivers, trams and other mobility users pass this intersection every day. Most of the times this interaction of actors with different speed, length and weight goes without incidents, but it’s never without a risk. Accidents do happen and unfortunately sometimes have a fatal outcome. In addition, traffic does not always run smoothly. Traffic lights cause increasing waiting times and the inefficient departure of cars after lights hitting green makes the congestions even longer.

Whit this premises the ART-Forum workshop at Shared Mobility Rocks1 kicked off. Michael Glotz-Richter and Suzanne Hoadley moderated the interactive session on the potential future impact of automated vehicles on our road transport system . Automated road transport has the ability to deliver a solution for both problems described above. However, the emerging technology also brings up some new questions. During the workshop we fired up the discussion on both advantages and disadvantages of automated road transport, yet not in a traditional way.

In order to really experience the potential consequences of automated vehicles first hand, participants of the workshop were divided into three groups, wearing three different types of t-shirts.

The green ones represent active road users, being pedestrians and cyclists.

The last ones, dressed in yellow, were chosen to be autonomous cars (SAE level 5)

During three experiments attendees were asked to behave according to the rules applied to their group. 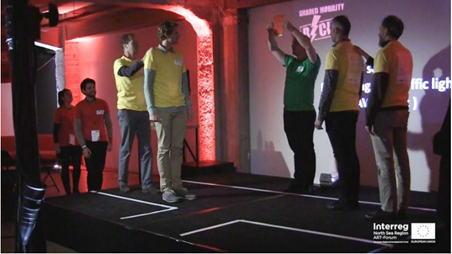 Undoubtedly, autonomous driving can bring huge advantages to the current mobility system. It has the ability to increase road safety and traffic flows and to implement more efficient forms of parking management, since cars can be parked very close to each other. Furthermore, a large share of the current car fleet could be removed from the streets. According to the International Transport Forum4 with the help of ride-sharing Taxibots up to 90% of all road vehicles can be replaced, “while still delivering nearly the same level of mobility as before”. It’s important to note the ITF modelled this autonomous Taxibots in a mobility ecosystem backed by high-capacity public transport, like metro and light rail. Qualitative public transport should therefore be seen as a conditio sine qua non for large replacements of the current car fleet with the introduction of autonomous cars.

However the participants of the workshop were also confronted with a large potential downside of the technology. We can expect a huge increase of traffic through the implementation of autonomous vehicles. Michael Glotz-Richter pointed out four reasons why traffic volume will increase, even with fewer cars.

Not yet understood how the workshop worked? Watch the video!