A successful V2G model in a Danish utility

A parking lot in the Danish municipality of Frederiksberg has attracted visitors from all over the world. They come to check out the V2G operation which Frederiksberg Forsyning, the municipal water and gas utility, has implemented in cooperation with Nuuve. The setup, which has been running for more than 5 years, is part of the company’s green transformation.

Frederiksberg Utility has a fleet of 10 electric vehicles which are used in the everyday operations of the utility, such as transporting employees and equipment to work sites. In the evening and at night, when the cars are not in use, they are hooked up to the grid through bi-directional chargers and thus provide flexible services to the grid.

”The fact that the cars are not sitting around idle when we go home, but the opportunity to give something back to society – to the grid -  we really liked that idea,” says Kristian Beyer, who is head of communications at Frederiksberg Forsyning. “This is a principle we pursue more generally in our projects to try to achieve multiple objectives within one project”.

The VG setup started in 2016 when the board asked the utility to begin a process of electrification of its fleet. One of the car dealers they contacted, Nissan, invited them into a research project on V2G headed by the Danish Technical University. Instead of a single electric vehicle, the utility then started out with 10 vehicles, one-fifth of its fleet,  all equipped for bi-directional charging. The utility paid for the vehicles but received 10 charging stations free of charge through the project. Once the project ended, FF entered an agreement with one of the project partners, NUUVE, so that Frederiksberg Forsyning gets its electricity for free, but NUUVE keeps the revenue from electricity trades. This model has proven commercially viable and suits the utility well because it allows the company to focus on its core business while leaving the business of electricity trading to NUUVE. 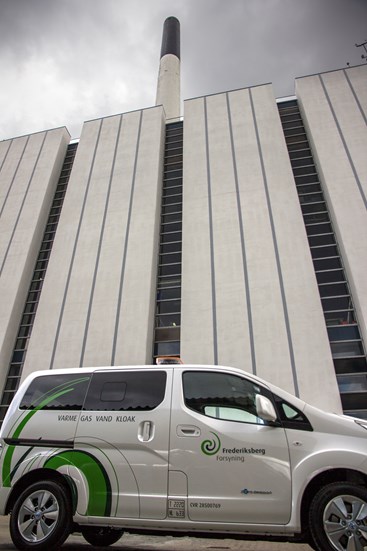 The project has reduced the Co2 emissions of the company considerably. In 2017, the company used 43,000 litres of diesel, which by 2020 had dropped to 17,000 litres of diesel (there was only a slight drop in activity levels during the covid-pandemic). In keeping with its overall green vision, the utility has invested in renewable energy to match the electricity used by its electric car fleet. Thus, the company has set up 6 wind turbines (annual production of 69 mill. kWh) in two municipalities south of  Copenhagen and has mounted 1323 m2 of solar panels on the roofs of its buildings. 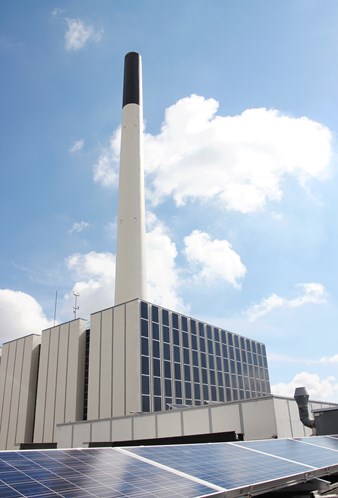 While the results may speak for themselves, Kristian Beyer points out two factors that have been crucial for the success of the project. Firstly, the decision was firmly anchored within the company so that board and management communicated clearly and in unison. Secondly, the company very actively engaged those employees who would be driving the electric vehicles, for instance, each driver had considerable say over the specific configuration of his car. They also reassured the drivers that they would never run out of power – which has held true. It helps that the municipality of Frederiksberg, located just west of the city centre of Copenhagen, is fairly small, but on the other hand, utility cars must be ready at all times so drivers can attend to emergencies such as broken water mains.  To this end, each driver has an app that allows him to initiate a fast charge of the utility vehicle. The inclusive approach helped reduce scepticism about the quality of electric cars and their suitability for the driving patterns of the utility’s employees. The daily experience that the system works alleviated any concerns drivers had, according to Kristian Beyer. But the success itself, the contribution to the green transition and the international fame it has brought, has also fostered a sense of pride within the company that also helped overcome any resistance there might have been.

At the same time, obstacles have been few. The main problem has been the limited selection of chargers. Charging stations delivered by the project were built according to Japanese standards which have limited the choice of car brands. That is changing. Likewise, electric car technology is developing so that it is now becoming feasible to use electric cars to transport heavy equipment. 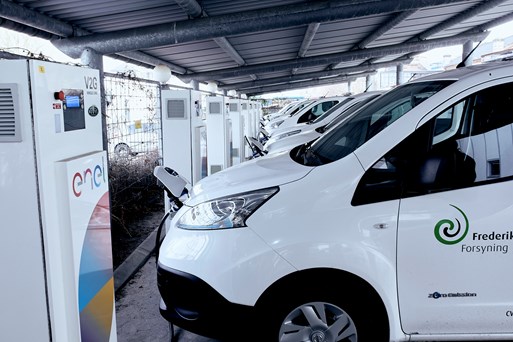 Frederiksberg Forsyning is now planning a complete conversion from fossil to electric cars for all of its activities by 2030.