Welcome to nine new regions in the future programme

Based on inputs from the participating countries, our Programme Preparation Group has made its final recommendations on the geography of the North Sea Region Programme VIB (2021-2027) to the European Commission.

We are thrilled to receive France as a new member country in the programme. Three French regions  - Hauts-de-France, Normandy and Brittany – will join us for the next chapter in the North Sea saga.

These regions jointly cover an area of approximately 90,000 km², with a population of 12.7 million. As they border the English Channel, the new programme area will extend southwards to the point where the North Sea meets the Atlantic Ocean.

New areas in Flanders and the Netherlands

With the addition of two new Flemish provinces (Flemish-Brabant and Limburg) and four Dutch provinces (Utrecht, Gelderland, Noord-Brabant and Limburg), the programme will cover all of Flanders and the entire territory of the Netherlands. We are excited to expand the possibility for even more Dutch and Flemish partners to cooperate within the programme.

As previously announced, the UK has decided to withdraw from the programme in the next period. Meanwhile, Norway has decided to refocus its participation on the southern part of the country, where around 91% of its population lives. 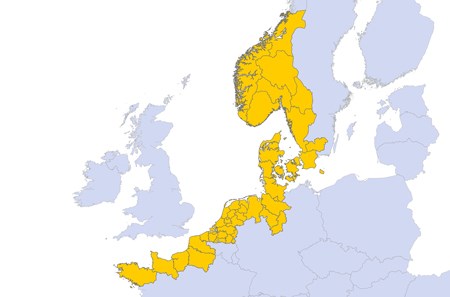 Each of the new regions brings their own special strengths as well as a keen interest in cooperating on the key themes of the future programme. They are home to nearly 22 million inhabitants, which almost exactly makes up for the loss of the UK regions and northern Norway.

Despite a conspicuous change of shape, we are firmly convinced that the strong spirit of cooperation will remain the same in the new programme.

A warm welcome to all the new regions! We look very much forward to watching new partnerships emerge and exciting projects unfold within the new geography.