On 17 June, our Programme Steering Committee approved 8 new projects among 10 full applications submitted in Call 9. This call thus saw an approval rate of 80%.

The approved projects are listed below.

In total, approximately €17.8 million was allocated to the new projects, including €16.8 million in ERDF funding and €980,000 in Norwegian funding.

We are excited to have these new projects on board and look forward to engaging with them!

A total of nearly €3.4 million of ERDF funding was allocated to these extensions.

Over €20 million was thus allocated in total in Call 9. The remaining funds available for distribution in future calls are €15 million in ERDF funding and approximately €470,000 in Norwegian funding. These amounts are  distributed across the priorities as shown in the figure below. 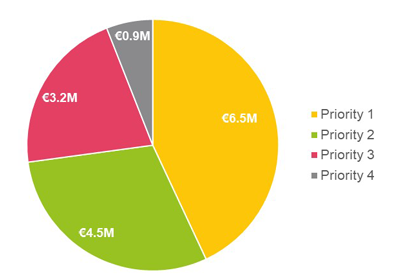