Politicians inspired by the PARTRIDGE project

21 September 2017 - Published by Anne Sofie Forfang
The PARTRIDGE project on biodiversity conservation in farmlands has had a flying start, gaining high-level political attention right from the outset.

On 13 September, the Danish Minister for Environment and Food Esben Lund Larsen visited one of the project's pilot sites - Rotherfield Demonstration Farm – as part of a delegation of 25 Danish parliament members.

They were keen to learn about the approaches of the PARTRIDGE project to improve biodiversity and ecosystem services in agricultural areas.

Led by the UK-based Game and Wildlife Conservation Trust (GWCT), the PARTRIDGE project explores how conscious management can help to revert farmland biodiversity decline. It focuses on the grey partridge, a key farmland bird species which has suffered drastic declines across Europe due to lack of suitable habitat.

The project showcases best-practice models across ten 500 ha farmland demonstration sites in the UK, Netherlands, Germany and Belgium. It expects to raise farmland biodiversity by 30% at each of the pilot sites by 2020. The main emphasis is on increasing the area of high-quality habitat tailored to the partridge by at least 7%, based on measures such as the sowing of wildflowers and provision of beetle banks. 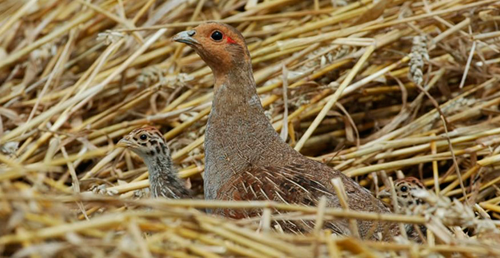 The Danish visit was not the first time leading politicians paid attention to this project which is still in its early stages.

In April, Phil Hogan, the European Commissioner for Agriculture and Rural Development and Martijn van Dam, the Dutch State Secretary on Economic Affairs, toured the project's demonstration site in Brabant, The Netherlands.

On 31 August, the project launch in Belgium was attended by the Flemish Minister of Environment, Nature and Agriculture, Joke Schauvliege, who expressed her enthusiasm about the project. 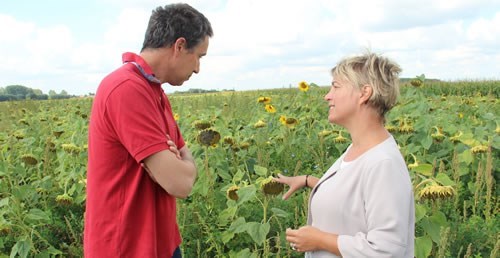 Minister Joke Schauvliege talking to farmer Tom Gillis, who is participating in the project to improve biodiversity on his land.

Attention from policy-makers is important for the project. One of its main goals is to influence agri-environmental schemes, as well-designed incentive schemes can facilitate the adoption of similar approaches on a larger scale.

THE PROJECT IN BRIEF
PARTRIDGE is a partnership between the UK Game and Wildlife Conservation Trust (GWCT), Birdlife Netherlands, the Georg August University in Germany, the Flemish Land Agency (VLM) and the Research Institute for Nature and Forest in Belgium (INBO), the Flemish Hunters Association and regional farm and conservation advisory organisations, local farmers and hunters. The project is led by the GWCT.
Learn more about the project

Top image: Danish Minister for Environment and Food in conversation with Harold Makant from Natural England while touring our Rotherfield demo site.

Images courtesy of the PARTRIDGE project.