HyTrEc2: Pressing on towards a hydrogen future

For nearly four years, the HyTrEc2 project partners have worked together around one common goal: To stimulate a green hydrogen transport economy, where zero-emission hydrogen fuel is produced by wind and solar energy.

Based on its innovative approaches, HyTrEc2 has received much attention. For example, it was honoured with the Scottish Green Energy Awards 2019 and is nominated for the RegioStars Awards 2020. The project has even contributed to plans to turn Northern Netherlands into a Hydrogen Valley and North East Scotland into a Hydrogen Hub.

Meanwhile, HyTrEc2 keeps steaming ahead, creating even more traction for its central idea. For example, the UK Minister for the Cabinet Office, Michael Gove recently visited Aberdeen to learn about the regional push for hydrogen. 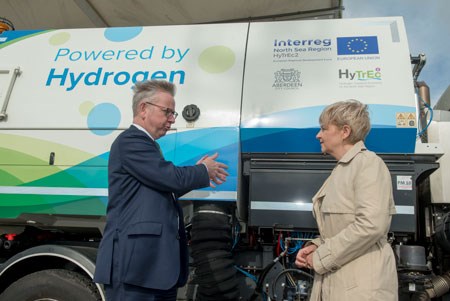 UK Minister of Cabinet Michael Gove in front of one of the innovative HyTrEc2 hydrogen vehicles.

In addition to deploying new types of hydrogen vehicles, HyTrEc2 addresses skills gaps in the supply chain, for instance by hosting webinars. And recently Aberdeen City asked for training materials to be developed as part of services to decommission a hydrogen vehicle at the end of its lifetime.

HyTrEc2 is nominated for the RegioStars Awards 2020 as one among five finalists in the category Industrial transitions for a smart Europe. You can vote for the project here by giving them a heart.

Also, you can now sign up to experience HyTrEc2 speaking at the virtual RegioStars talk during the EU Week of Regions and Cities!

Read their lovely postcard inviting you to join their vision!