We are extremely proud to announce that the HyTrEc2 project has been chosen among the 25 finalists for the RegioStars Awards. HyTrEc2 is selected within the category "Industrial Transition for a Smart Europe".

This year has seen an unprecedented number of applications for the RegioStars Awards, with 206 projects applying in total.

A future with green hydrogen

HyTrEc2 is successfully taking the concept of hydrogen as a clean fuel to the next level.

Working with a broad range of stakeholders from citizens to international energy companies, the project is promoting green hydrogen made from wind and solar energy.

Although hydrogen is in itself a clean fuel, its production requires energy, so it matters how it is produced. The importance of green hydrogen is emphasised in the new EU Hydrogen Strategy, unveiled on 8 July 2020. The strategy underlines the rising importance of hydrogen as part of the green energy transition. 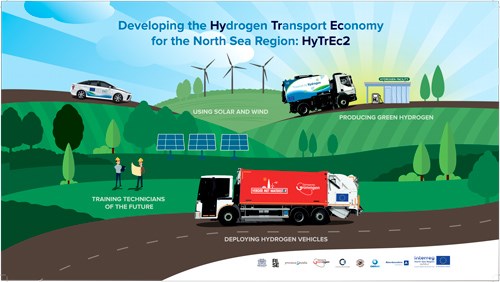 The project tackles a host of challenges of introducing hydrogen, including the development of innovative hydrogen vehicles and skill-building in the supply chain.

Reducing the carbon footprint of transport as set out in the EU Green Deal is a tough challenge. In Europe, transport is the only area where CO2 emissions are not falling. There is a clear need for a significant transformation of the transport sector, and green hydrogen could be a big part of the answer.

Big congratulations to HyTrEc2 on being selected for the final round in Brussels!

If you like the project's work to build a strong green hydrogen economy in the North Sea Region, you can now vote for HyTrEc2. In addition to the category awards, one project will recieve a public choice award based on the number of votes.

See the list of finalists and cast your vote