This year marks the 40th anniversary of the Birds Directive, a centrepiece of European nature conservation law. A brochure published by the European Commission to celebrate the anniversary highlights the PARTRIDGE project for its efforts to reverse the massive decline of farmland birds.

PARTRIDGE works to increase biodiversity indicators by 30% at their pilot sites, where farmers have set aside minimum 7% of their arable land for the purpose. The project brings together hunters, farmers, conservationists, researchers, civil servants, and local volunteers around this common goal. Initial results are promising, and PARTRIDGE has attracted a great deal of interest from top politicians and mass media across the North Sea Region.

At the Joint Secretariat, we are proud to see PARTRIDGE recognised for their hard work to support wild farmland birds, helping to realise this European landmark legislation.

Download the anniversary publication
You will find the PARTRIDGE project featured on page 19 and 23. 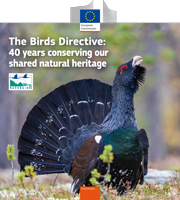