And the winner is...

At the Opening Dinner of the North Sea Conference on 13 June, the two winners of the first North Sea Region video competition for ongoing projects were revealed.

Building with Nature was chosen as the winner whilst a video submitted by CATCH was chosen as the runner-up. Both projects received awards, and the winning videos were screened before an audience of 300 people. 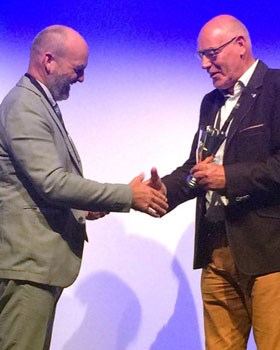 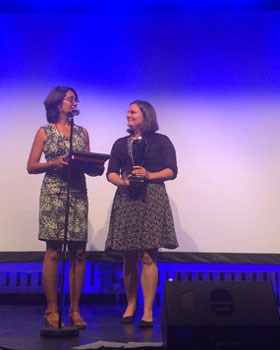 Priscila Kramer and Sarieke Wolthers received the award on behalf of the Building with Nature project, whilst Chair of the CATCH project's Steering Committe Jan van Hoek received CATCH's award.

Kate Clarke, Norwegian National Contact Point of the North Sea Region Programme and Senior Advisor at the Department for Regional Development of Hordaland County and Andreas Lervik, Vice President of the North Sea Commission, handed out the awards.

The decision was jointly made by 14 judges, two from each of the seven North Sea Countries appointed by our Monitoring Committee. Projects submitted 10 videos in total.

Building with Nature works to demonstrate how the North Sea Region can build climate resilience with natural structures such as sand dunes and natural vegetation.

Their video was chosen as the winner due to its appealing narrative, visualising how we can protect ourselves against climate change by befriending and supporting nature.  The video aptly and cleverly uses sand as a key design element.

CATCH won the place as runner-up for its video presenting the project and its quest to help mid-sized cities cope with water management in a world increasingly influenced by climate change. The video is an example of beautiful execution and clear representation of an Interreg project's goals and activities.

At the Joint Secretariat, we are very pleased with the level of participation and creativity shown by ongoing projects, despite a rather short time frame for submitting the videos.

This year's North Sea Video Contest was the first, but it will not be the last. Next year's competition will be announced after the summer break.

> Watch all videos participating in the competititon