17 January 2019 - Published by Debbie Glen
‘De Verrekijker’ and ‘Klimop’ are two municipal primary schools in Ravels, Belgium, that have taken up the Energy Challenges. In both schools 'Mie and Gie' put up a show with theatre, music and dance and launched a new slogan among the school children: "We are joining Mie and Gie, so we can save more energy”.

Since September 2018, 12 Belgian schools within the IOK-partner region are implementing Energy Challenges. ‘De Verrekijker’ and ‘Klimop’ are two of them.

‘De Verrekijker’ and ‘Klimop’ are municipal primary schools with 165 and 350 pupils from 3 to 12 years of age.

Both schools and the city council want to reduce energy consumption significantly. To kick off this ambition, the school set up a noisy stage: all children were asked to bring bells, horns, whistles…to school to organise a ‘wake up for climate’. Why? Because we need everyone to save energy. 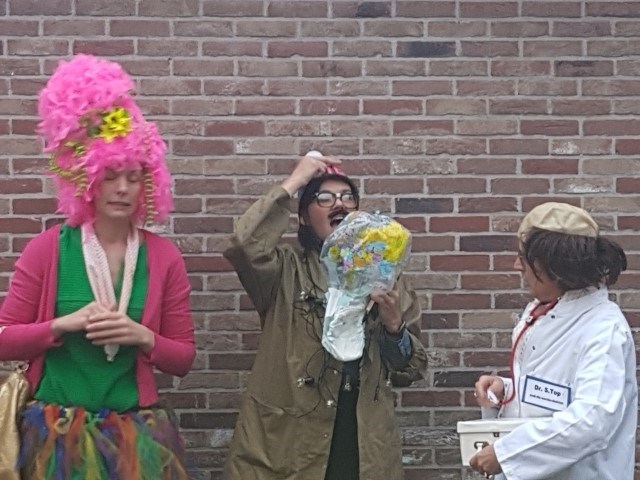 Mie and Gie and Doctor S.Top visiting the school

Mie and Gie entered the school stage in complete panic. Tears flowed and they did not know what to do: our earth is sick, very sick! High fever and a lot of flooding... Sadly, Doctor S.Top also had no solution and asked the help of all the school to heal the earth. Only together we can do more! #wakeupforclimate

Mie and Gie put up a show with theater, music and dance. They also launched a new slogan among the school children, all singing out loudly: "We are joining Mie and Gie, so we can save more energy”.