23 April 2019 - Published by Debbie Glen
Pupils and teachers of 11 schools in the Sønderborg Municipality have kicked off the 2IMPREZS project so far, focusing on change of behaviour with the aim of reducing CO2 emissions by at least 15% in their schools.

One of the 2IMPREZS schools in the Sønderborg Municipality is the Nybøl School. On the 1st of March 2019, Michael Stender, Project Officer from 2IMPREZS partner House of Science (HoS), visited the fourth year class to help them start up the project in cooperation with their teacher.

Michael Stender showed the pupils examples of behavioural changes; for example waste sorting, or recycling plastic bottles. Stender recommended a gradual change of behaviour starting with one class instead of the whole school.  The fourth year class was given examples of rewards (i.e. smiley face stickers) they could give their fellow pupils who demonstrate sustainable consumer behaviour.

2IMPREZS representative Michael Stender had taken some photos in advance of some spots in the Nybøl School where there could possibly be room for energy optimisation. The fourth year class then was tasked with examining whether there was room for improvement or not. The subjects in question were electricity, water, transportation and waste. Heating is another major topic of discussion, but was not chosen for the first examinations—this will come later.

The pupils divided into groups and decided which particular subject they wanted to work on for the next months, as well as what they want to examine, what habits they want to change and, finally, how they would do it. Members of the fourth year class are to be ‘’idea agents’’ and give input to their teacher. Michael Stender will then decide which cases they shall continue to work on.

However, before the class continued their work on a real case, they needed a little training how to measure CO2 emissions. Therefore, the class conducted a few exciting exercises…

How much water is necessary to wash your hands properly? 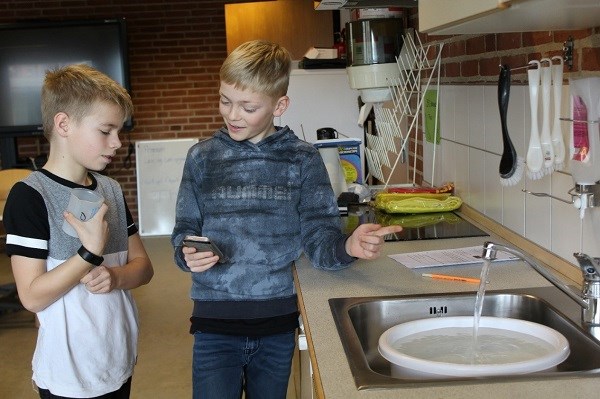 Remember to turn off the lights when you leave the room, and to turn off your device when you are not using it.

Old energy-sucking devices were turned on, and the power consumption was measured by a Kwh meter. 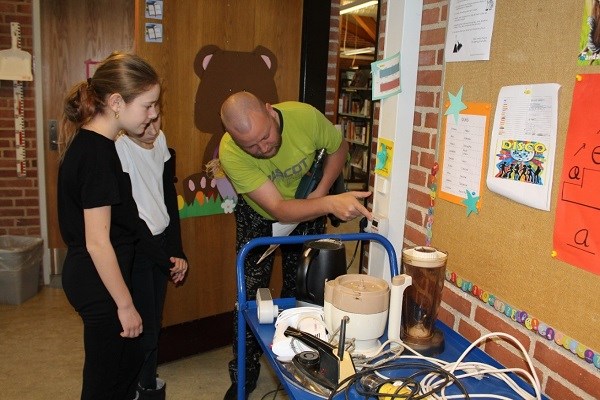 Pupils and their teacher measure how many kWh the old electric devices use.

Pupils were taught how to sort their waste in their particular municipality, in addition to weighing their plastic waste and calculating the CO2 emissions of said waste by using a formula. 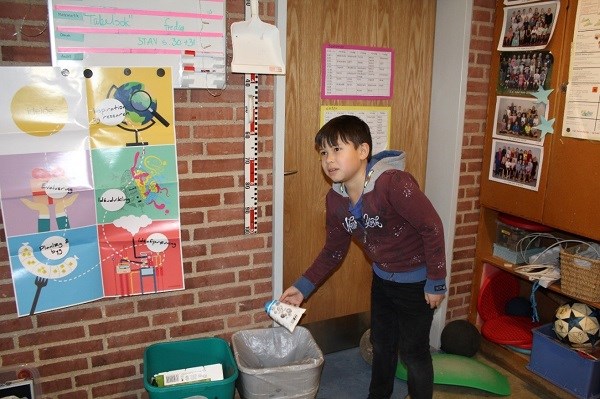 Waste sorting is important! Therefore, there are two separate waste bins in the classroom.

Use your bicycle instead of your car!

By focusing on transportation, the pupils should find out how many of the 126 pupils in the Nybøl School use their bicycles to commute to and from school, and how many teachers use bicycles as well as cars. The teachers were asked, how large is the car they drive, and how many kilometres they drive to work every day. With these figures, the fourth year class is able to calculate the CO2 emissions related to transportation in their schools. 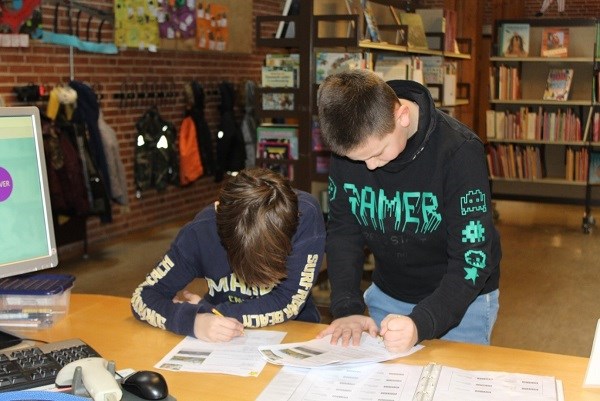 Pupils in the Nybøl School calculate the CO2 emissions in connection with their teachers’ transportation habits when commuting to and from school.

All these assignments provided the students with the necessary skills to continue their future work examining the possibilities of behavioural changes leading to CO2 reduction. Best of luck to the pupils of the Nybøl School in the international Energy Challenges!

Sønderborg has strong traditions for being in the forefront regarding learning, education and competencies. Not many cities of the same size have the same impressive variety of educations and schools—in Sønderborg, one can study from kindergarten to the PhD level. Sønderborg also ranks amongst the highest populated areas in Denmark for (university) engineers.

To stay in the forefront with all the highly qualified engineers and scientists, the House of Science project was created in 2008 by the Sønderborg Municipality, ProjectZero, (Danfoss) Universe and the four local high schools/colleges: AGS, Business College Syd, EUC Syd, Statsskolen. Now, the list of participating partners also include SONFOR (utility company), VUC (high school) and Jet-Net (national cooperation for industry/schools).

Science teachers in the Municipality´s 17 schools have been introduced to modern and GREEN science and educational/learning methods. High school students have become science coaches or teachers for school kids. Nature awareness and energy saving concepts have been implemented in kindergartens. High school kids learn about energy and business management in local companies.

Since its start in 2008, House of Science has had an increasing focus on Climate, Innovation and Sustainability in order to secure a bigger impact and harvest synergies with other ProjectZero participation programmes. The ambition is now to create a strong green line from kindergarten to PhD.

Sønderborg Municipality has around 74,500 citizens.