04 February 2020 - Published by Debbie Glen
The first four kick-off celebrations have already taken place across the Netherlands, setting the scene for a great year of energy savings. Children are very enthusiastic and motivated to start with their campaign of consuming energy in a smarter and more sustainable way. 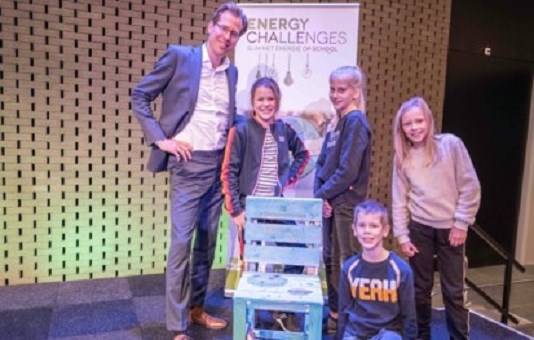 The Energy Challenges awareness campaign "Smart with energy at school" has officially been launched nationwide, following last month’s motivating ‘kick-offs’ in four different regions across the Netherlands: Alkmaar, Groningen, Losser and at the Province House in the city of 's-Hertogenbosch. The final kick-off celebration, which will launch the 2020 Dutch Energy Challenges in the Utrecht region, will follow in early February. In total, more than 1000 elementary school students have already taken part in the festivities.

At the various kick-offs, there was no lack of enthusiasm amongst the students: they can't wait to get started with energy saving and sustainability at their schools. During the kick-offs, all kinds of workshops, including recycling games and crafting Energy Eaters, were held to inspire the children to design their campaign in a more professional way. Collaboration and entrepreneurship are encouraged. Throughout the 2IMPREZS project and Energy Challenges, the children learn everything about sustainability, technology and energy.

"Energy Challenges is a project for students aged nine to fourteen in primary and secondary education. They are challenged to design their own campaigns to use energy in their school in a smart way," explains Head Director of the Energy Challenge Netherlands, Ingrid Kloosterman, “because the children are allowed to decide how they shape this campaign for themselves. They become enormously enthusiastic and motivated, and from previous editions we know that this is very contagious—not only at the schools, but also in the children's environments."

According to the Dutch 2IMPREZS partner, Energy Challenges Netherlands, "People are getting excited everywhere and start using energy in a smarter way. If you look at the savings at schools, this behavioural change almost always results in more than 15% energy savings in practice." Substantial energy savings through such small-scale measures in 2IMPREZS schools translates to lower carbon emissions across the North Sea Region.

In Groningen, the ''Energizers’’ were enthusiastically addressed by the Dutch Energy Challenges ''patroness’’, Nienke Homan, Deputy of the Province of Groningen. In the city of ‘s Hertogenbosch, a group of students presented their ''future chairs’’ they had created in one of the workshops to Christophe van der Maat, Deputy of the Province of Noord-Brabant. The mission statement behind the ‘’chair of the future’’, a Dutch Energy Challenges concept that has also been adapted across the North Sea Region within the 2IMPREZS project, is that every time the province must make a political decision, they will ask themselves:

What influence does our decision have on our future generations?