15 August 2018 - Published by Debbie Glen
Over the course of spring 2018, the Mads Clausen Institute has developed four workshops aimed at high schools as part of the NSR Interreg project 2IMPREZS. The development work has been done in cooperation with local high school Sønderborg Statsskole. At present, three of the four workshops have been held with students from Sønderborg Statsskole.

High school students from Sønderborg Statsskole have now participated in the first three of four workshops dealing with energy efficiency in schools as part of the NSR Interreg project 2imprezs. The workshops have been developed by the Mads Clausen Institute (MCI) from the University of Southern Denmark (SDU), which is a partner in 2IMPREZS, with the help from staff from Sønderborg Statsskole.

The four workshops are part of a best-practice model of how to increase the awareness about energy and energy consumption amongst young people in high school.

In March, the first two workshops, on Smart Energy Technology and Solar Energy, were carried out, and in May the third on Business Models took place. The fourth and final workshop of the model is scheduled to take place at MCI in early autumn. Named Hands-on Research, it will allow high school students to receive a first-hand impression of the energy research activities and facilities of the MCI.

Common to the first three workshops is that they are comprised of a combination of lectures, hands-on experiments, investigations into the school’s energy consumption, calculations and, at the end, a school assignment involving a paper where the high school students account for what they have learned and reflect on new possible energy-saving investments for the school. 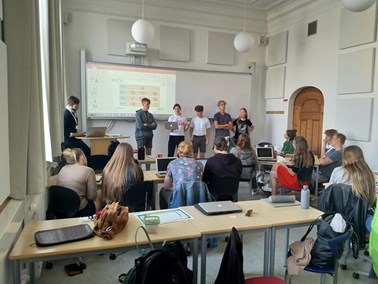